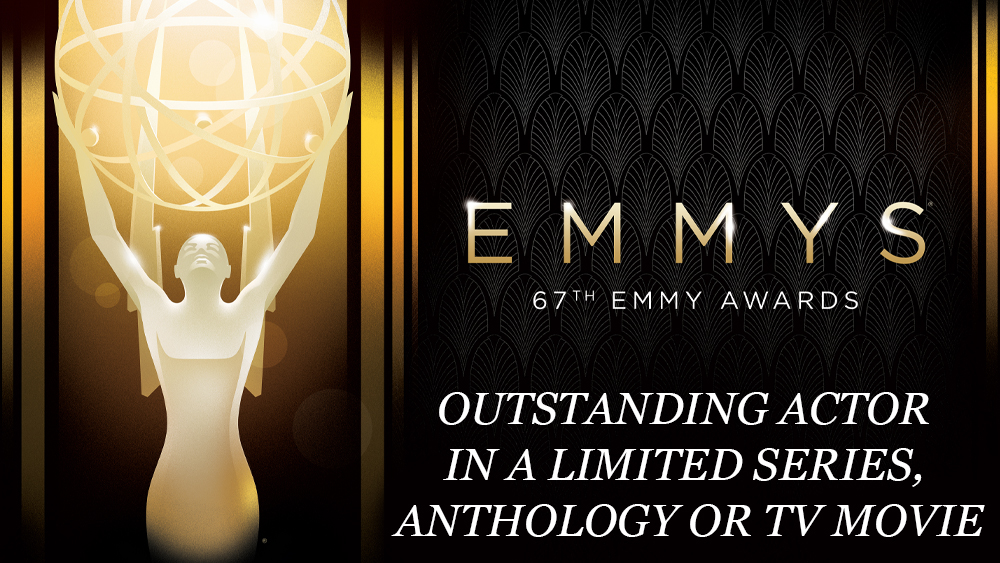 In what is often the case, a group of actors known perhaps more for their work on the big screen than on the small screen managed to land most of the six slots here. With a past Spider-Man, a past Batman, and a past denizen of the Star Wars galaxy, not to mention a Best Actor Oscar winner, we have a lot of big names who also spent time in some unique television projects that called upon other acting skills. Only two of them are in Limited Series that also landed a nomination for the show itself in the main category, so voters clearly did a lot of sampling. Four of them got their first Emmy nomination ever, and none have ever won.

The Best Actor Oscar-winning star of The King’s Speech found another juicy role as a crime novelist accused of killing his wife, resulting in a battle for justice that lasted 16 years. Based on a notorious real-life case, it landed Firth only his second Emmy nomination ever, and the first in more than two decades. His hopes lie in the show itself — which has only two nominations (the other for co-star Toni Collette) — being widely-viewed enough to encourage votes.

Andrew Garfield, Under the Banner of Heaven

Garfield comes off a banner year himself after an Oscar nomination for tick, tick… BOOM!, an acclaimed turn opposite Oscar-winner Jessica Chastain in The Eyes of Tammy Faye, and a return to the Spidey multiverse in last year’s No. 1 movie, Spider-Man: No Way Home. He now lands his first Emmy nomination ever as a devout detective caught up in a vicious murder case that tests his own faith. Repping the show’s only nomination, he is a long shot here.

Oscar Isaac, Scenes From a Marriage

This American adaptation of Ingmar Bergman’s classic film — and before that a Swedish limited series — offered plum roles to Isaac and co-star Jessica Chastain. Surprisingly, she missed out while he got the glory of a first-ever Emmy nomination that, like Garfield’s, serves as the sole nod for the show itself, meaning the odds are long that he will be able to pull out a win. His starring role in Disney+’s Moon Knight gives him further exposure this season — the show landed eight tech noms — but a win seems unlikely here.

With the highest-profile show among these contenders, Keaton got a head start winning the SAG and Critics Choice awards for his performance as Dr. Samuel Finnix in this highly regarded show. Clearly all that gold means he is a definite frontrunner to take the Emmy as well, and quite frankly anyone else’s name in the envelope will be considered a bit of a shocker. This represents only Keaton’s second career Emmy nomination, the first coming for a non-fiction special on Fred Rogers.

In a series that follows a group of survivors in a post-apocalyptic world where a deadly flu pandemic has wiped out most of humankind, Patel lands his first Emmy nomination. Coming off a string of impressive films like Don’t Look Up, Tenet and Yesterday, this role represents another step forward for this talented actor, but though the series took six other nominations it might just be too big a hill to climb to beat out Keaton.

Stan deserves an Emmy just for the level of exposure he had to endure in bringing Tommy Lee to life, and that includes working opposite his talking male appendage. Stan was all in, going for it and bringing some nice poignancy and even human dimension to this offbeat relationship, On top of everything else he had to be thoroughly convincing as a rocker and play the drums. He pulled it all off — and out — in style, and if anyone can stage an upset here it has to be this guy.

Seth Rogen, as the shady contractor who steals the sex tape in Pam & Tommy, has the unique advantage in this category of being the single nomination for a show; The White Lotus and Dopesick each took three of the seven overall slots. Logic might say that Murray Bartlett, Jake Lacy and Steve Zahn split the difference as part of the Lotus cast, while an imposing trio of Will Poulter, Peter Sarsgaard and Michael Stuhlbarg do the same from Dopesick. However, it doesn’t quite work out that way at the Emmys, which doesn’t hold multiple nominations from the same show against the actors competing with their castmates. With that in mind, the supporting acting Limited Series categories seem ripe for the showcase of the White Lotus stars who should blossom at the Emmys. In this category, my bet goes for the beleaguered hotel manager played by Murray Bartlett, who already won the Critics Choice Award and looks like a winner here as well, with what is really a leading role in terms of its weight.