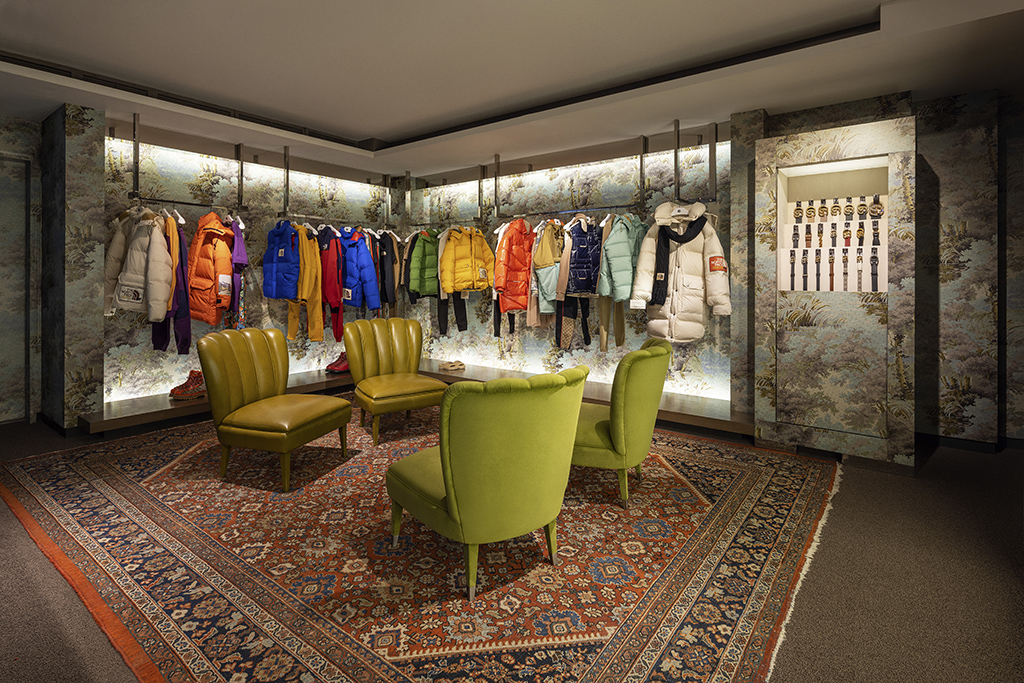 Despite the many obstacles plaguing the retail world right now, from the spread of Omicron to high inflation and supply chain issues, Gucci is investing in its brick-and-mortar strategy this year.

First up, the Italian luxury brand has unveiled plans for a brand-new series of pop-ups dedicated to the second chapter of its collaboration with The North Face. The newest phase of the partnership sees a special cross-category collection for men and women comprising of ready-to-wear, soft accessories, luggage and shoes, including many pieces as hiking boots, multi-pocketed backpacks and warm, insulated jackets that reference the outdoor world.

According to Gucci, its North Face collab pop-ups will “suggest a clean icescape,” bringing a semblance of a winter landscape to the shops. The brand said that LED lighting will reflect on the walls and floors, which are coated with different materials such as mirrored glass, white fluffy fabric and clear, marble like panels. And, the space will be defined by a series of irregular cubes of different shapes and sizes, recalling a glaciers landscape, serving as display support to the product offering, Gucci said in a statement.

These pop-ups will open on Fifth Avenue in New York City, Aspen, Chicago, and Toronto.

Moving to New Jersey megamall American Dream, Gucci is setting its sights on expansion in the development’s high-end wing, The Avenue. Saks Fifth Avenue anchors The Avenue and already features an in-store Gucci boutique. But the Italian powerhouse brand is upgrading, recently signing a lease for a standalone, two-story, 10,000-square-foot store that will operate in tandem with the Saks shop-in-shop. The mall did not confirm an opening date.

Gucci will join Saint Laurent, a fellow Kering brand, which has also announced it will soon expand its footprint at American Dream with a 7,000-square-foot store spanning two floors of The Avenue, creating its largest New Jersey location.

This investment in retail comes as Gucci parent company Kering reported third-quarter sales in October of 4.19 billion euros, up 12.2 percent from last year’s 3.72 billion euros. During the three-month period, Gucci sales rose 3.8 percent to 2.18 billion euros from 2.08 billion euros in the previous-year quarter.

The company stated that the “third quarter brought the successful launch of the Diana bag, while the Aria collection gradually arrived in stores from late September. Good sales momentum continued in North America and Western Europe, particularly with local customers.” Kering also forecasted that Gucci was set for an “intense” fourth quarter at the time of the report due to the launch of its anticipated Aria collection.