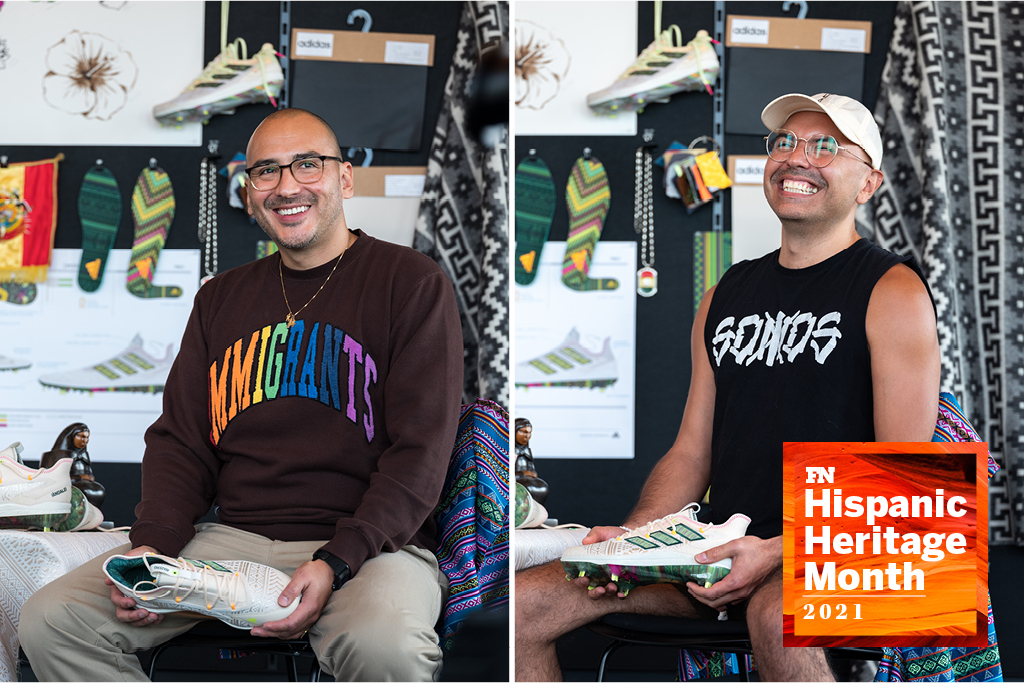 Some of baseball’s brightest young stars lace up Adidas when they step foot on the diamond. And this month, the Three Stripes gave them something special to wear to celebrate Hispanic Heritage Month.

Led by senior designer Harold Arandia Jr. and apparel technical designer Julio Aleman, Adidas delivered a special iteration of its Adizero Afterburner 8 cleat, a look that pays homage to the heritage of Latin Americans, both on and off the field. The cleat is adorned with a custom tapestry and hand-painted flowers, which the brand said were added to represent Latin American countries.

“We started with the idea of hand-woven tapestries which can be seen across different countries. Each can vary in style, but some commonalities in color and graphic can be found,” Arandia Jr. told FN. “On the [Stealtrax outsole] plate, we wanted to have some sort of marker to be able to call out countries. Many people outside the industry don’t know the hurdles we go through creatively since there are legalities to country names and buildings. Our creative solution was to use country flowers as Easter eggs for different countries represented by players on field.”

This iteration of the Adidas Adizero Afterburner 8 is available now via Adidas.com and comes with a $130 price tag.

Aleman told FN that any Adidas product would provide a great canvas to celebrate LatinX heritage, but given the backgrounds of baseball’s brightest modern stars — and his and Arandia Jr.’s memories of the sport — working on a cleat was fitting.

For Arandia Jr., his fandom began in Los Angeles as a kid in the 1980s, when the success of superstar Venezuelan pitcher Fernando Valenzuela created “Fernando Fever” in the city. Today, he feels similar excitement when he watches the likes of Fernando Tatís and Kiké Hernández.

And with Aleman, his earliest baseball memories include hearing stories about the late Roberto Clemente. Although Clemente was one of the greatest players of all time, Aleman said he was one of the only people in the mainstream who looked like him, which allowed him to believe he could become whatever he wanted to in life.

In bringing this latest shoe story to life, Arandia Jr. and Aleman both give high praise to Adidas.

“Adidas leadership, such as Zion Armstrong, was very supportive in helping us start VIDA, our internal Latinx employee resource group. This was before the changes going on in the world since the pandemic. And we have people within our organization who have whole-heartedly championed us,” Arandia Jr. said. “I used to think I was the only Bolivian here at work. A joke I used to have with my mom was: ‘The only Bolivians I meet are related to me.’ But through VIDA, I met a couple of Bolivians as well as other great people within the company that I would never have gotten to know otherwise.”

He continued, “That greater community allows us to shape what our influence is internally. We are more involved in the topics and decision-making on projects that affect us and our community. The brand sees the benefit of having us be involved and Adidas is helping to get our voices out more. It is through their support that I get to talk about this [baseball cleat] project. Adidas is doing a better job, but I know there is still such a long way to go here and across the whole industry.”

Aleman agreed. “I’ve been impressed with how the brand continues to make topics of diversity, equity and inclusivity a central point of conversation,” he said. “Their efforts have been helpful, but of course we as a corporate culture still have a long way to go. The important thing for me as an employee is that I feel comfortable speaking up and keeping them in check.”

Aside from the athletes he works with, Arandia Jr. said he takes inspiration from people within the company who share a similar heritage, including colleagues Erik Mendoza, Marisa Lara, Efrain Coronado, Ernesto Bruce, Edwin Martinez, Oscar Rodriguez and Eddy Zamora. Outside of Adidas, he looks to Under Armour principle design ambassador and creative director of innovation John Acevedo, Nike senior footwear design director Nate Jobe and Colorway co-founder Juice Rodriguez.

As for Aleman, he has also found inspiration outside of the company, particularly in designer Marcela Dyer, founder and designer of the label Myriam Marcela, as well as the factory workers who make the products we consume today.

Both designers said they like to hear the narratives of others, and believe footwear and fashion have a responsibility to do so — something they feel the industries have historically done poorly.

“Footwear and fashion are vehicles of expression, and ultimately an opportunity to speak and promote ideas not only via the catwalk and the streets, but also behind the curtain in seats of ownership and creativity,” Arandia Jr. said. “You do have some known standouts like Oscar de la Renta and Carolina Herrera, but ultimately the mainstream industry hasn’t played a big part in promoting the Latinx community outside of asking for our dollars and purchases.”

Aleman agreed, and added that he, too, feels a responsibility to help others find their way. “This industry, like many others, is not made for us. If you look at the stats, this industry is heavily made up of white men. Latinx people can’t be promoted in an industry that we didn’t even know we could be a part of to begin with. Those of us who have had the chance to enter the industry have a responsibility to pay it forward and continue the work to diversify the makeup of apparel and footwear designers. That’s my personal role in this.”

However, now more than ever, emerging creatives are telling their own stories without the help of a major brand — something Arandia Jr. finds particularly impressive. The designer said he’s particularly fond of the work of Daniel Buezo and Weleh Dennis of Kids of Immigrants, and Joey Barba and Javier Bandera of Paisa Boys.

“These are the young Latinx creatives who aren’t waiting for the industry to come to them. They are using their experiences to inform and create pieces that speak authenticity to Latinx experience through fashion and footwear,” Arandia Jr. said. “These are the people who make me smile, and I know there are more out there I have yet to discover. I’m not really waiting on the mainstream industry to promote the Latinx community and it seems the young creatives aren’t waiting on the mainstream industry to discover them in order to do what they want to do.”